A downloadable Visual Novel for Windows and macOS

Being an adult sucks! Life was so much easier when Akiko was saving the world with her magical girl squad, the Sentinels. Now she's stuck working a boring retail job, watching the days creep closer to Y2K. She’s lost touch with her high school friends, her powers, and herself. Where has the magic gone?

this story is so freaking cute and amazing, I just hope for Jackie and KJ's routes to actually come out soon

im not sure if i already commented but i played this a month ago and IT WAS SO GOOOOOD the aesthetic and feel is amazing and has been stuck in my head. are jackie and KJ's routes up yet?

This IS GREAT OH MY GOD how could “they” (world) hide it from me ! Art, writing, wits… Gonna do all the routes :3

hello!! i love this game so much already, i'm so excited to go through all the routes! i'd love to join the discord, but the links are expired! can someone help me with that? thank you!! :)

thanks so much for playing! here's another link, hope to see you there! ^^ https://discord.gg/cANtujb2Km (it's 18+ btw!)

this is such a great game i love it so much

I loved this! The art, music and writing was so fun and I can tell so much love was put into this!

Thank you beachfuneral!! We definitely put a whole lot of love into this project, and I'm glad it came through <3

Absolutely loved this game. Themes and characters are fantastic - even the villain was interesting! Seriously, this was such an interesting, thought-out look at what life after being a magic girl could be like. Also, huge thumbs up for all the queer rep.

My only complaint? That I would love more! :P

Thank you so much for playing and for writing this, we’re so glad you loved it!! It is possible to get different endings– right now we have multiple endings for three of the characters (ARA, Miranda, and Leez), both romantic and friendship, PLUS an adorable secret bonus ending… and KJ & Jackie’s routes are in the works!

We’re working on a walkthrough too for anyone who wants to make sure they see all of them >:3

Oooh I’ll just have to look forward to that walkthrough then! :D

Your game has so much heart. :)

so excited for the extra routes! I love some queer magical girl content... and the pixel art is a bonus! <3

I finished this yesterday but I forgot to leave my comment! Let me start saying that I love magical girl storylines, specially if they're sapphic, so of course I really enjoyed this visual novel.

The art style was stunning, the music was nice and I was very invested in the story as well. I wasn't having a great day but playing this help me get distracted a few hours.

JK was my favorite character of them all and I appreciate the fact that they're non-binary like me, I think that's pretty cool since I don't see many non-binary representation in visual novels or in media in general. It's a shame their route isn't available just yet, but I'll come back when its released!

This warms my heart! I'm so glad this game was able to an uplifting part of a not-so-great day for you. That's exactly why we make these games!

We'll definitely keep you updated on KJ's route. They're a beloved part of our cast, and we're so excited for their extended route to be available. <3

We update our public Discord for build changes + patch updates, so if you're interested, feel free to hop in if you haven't already: https://discord.gg/KKmUvYMW

Thank you so much!

i adore this game with my whole heart. I think this concept and project comes from very authenticate and genuine spaces of the experience of growing up on magical girl shows. It’s a beautiful art piece and a cry of where to go next because none of our media growing up of our main protagonist girls ever fought a villain as sickening as growing up.

The art direction is both tailored but suited to the exact time period it’s set in but also the shoujo and cute characters that people who grew up with games at the time. I say this while also believing that it works still incredibly in current contemporary pieces, I don’t think it dates the project or makes it too niche. I think the art direction is made with intention and the overall approach is extremely contemporary.

The characters are beautiful women and enbys. There’s a perfect balance of both direct and spoken representation with KJ’s transition of being non-binary and the cast being sapphic on some level. But also a lot of give for the player to self insert head cannons for characters. When I played, I had perceived Miranda to be neurodivergent, mostly that they were on the spectrum. There’s plenty of times where I had head cannoned Leez to also be asexual / on the grayscale. These examples are important for stories about characters of representation because it’s also important to write characters to both state their representation but allow players/viewers to relate to in ways they can. Also as a fellow writer who cares about representation, sometimes it’s also better to focus on fine tuning how characters present themselves without having to doing a checklist of keywords they have to say.

I think having the villain to end up being also a retired magical girl also adds another level of dilemma of the narrative already. an example of where it could have all gone wrong, but also how can you reach out to someone who’s so far gone. Questioning the ethics of being a hero and when can helping someone can even be achievable.

And maybe this is a cheesy final thought, but if asked to have any critique, it’s that I want more. I love the world they reside in and I think the characters are extremely well crafted. But I say that with an asterisk because I don’t believe it should be doubled in workload, I think the gameplay is a comfortable length, but maybe more exploration of the villainess and her story at the end? Or more Main Character(MC) delving into what they’ll do with their own job afterwords and their goals/dreams. (But to be fair I had a neutral/bad ending so there’s a huge chance I just didn’t unlock it LMFAO)

Over all, I think this game is made with lots and lots of love with the team and I had the absolute most fun being able to delve into their world and falling in love with these gays.

Thank you, Team Starlight, to help me coming to terms and finding comfort of knowing that there are others who experienced this hard truth growing up.

Please do expect a video essay this 2022 LMFAO

Thank you so much for writing all this and for all your support Ami T^T So happy that you loved it and that it landed the way we were hoping!!

We’re definitely going to be making tweaks to the ending unlocks to make sure you’re rewarded for your thoughtfulness in each character’s route– I hope you’ll love them too once we patch them in! Plenty more content coming >:3

I wish I could print out this review and frame it! <3 Thank you so much for everything you've done to help review the game in this early stage!!! Your insights have helped us TREMENDOUSLY this weekend.

We'll do our best to keep updating the contents to make sure it's video-essay worthy!

dibs on being the first comment, because I just cannot hype this game enough.

Or at least that's what other magical girl series want you to think.

"Life After Magic" really does a lot in such a short time - it's about a seven hour commitment - and by the end I was invested in every character, even the ones I wasn't big on when I started (sorry I rolled my eyes at every other word you said, ARA). Their struggles and relationship with magic - a childhood aspect of their identities - felt relatable and genuine. Who hasn't looked back on their past selves with love and frustration? Who hasn't wondered how much they've actually grown up?

Also, it's just hilarious, and every sapphic on the planet needs to play at least once.

Thanks to the entire team for this game. I can't wait to play more when Jackie and KJ's routes are released <3

MARY!!! Thank you so, so much for your insightful comment and the test build playthrough you did!

We're super proud of the work we did on this game - but getting to hear from players like you really reaffirms that. I'm so touched that you enjoyed all of the characters, and we'll definitely do our best to get Jackie and KJ out for ya! >:D

We appreciate your time playing through the game, your commentary, and support!

This review really just makes me glow, it means so much to hear 🥺 thank you for playing our game and for the support you’ve given us!! 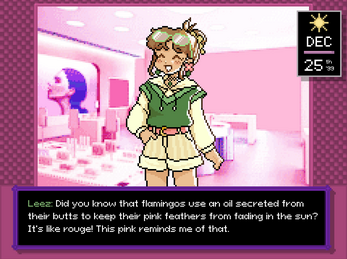 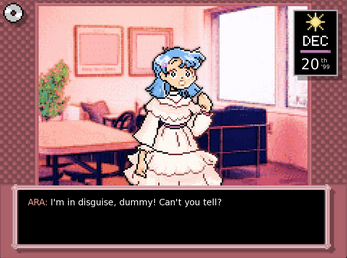 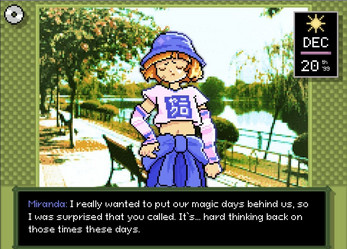